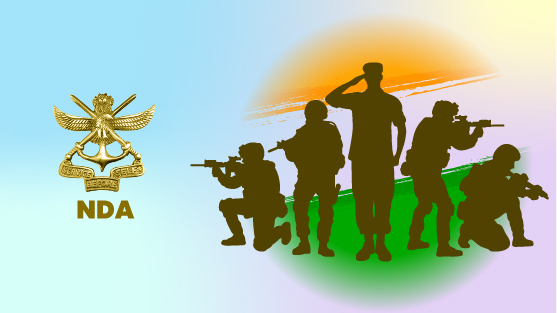 NDA 1 2022 Notification Out: Union Public Service Commission has released the NDA-1 Exam Notification 2022 on 22nd December 2021. The candidates who are interested in NDA I Exam 2022 must bookmark the dates and those who are interested in upcoming NDA Exams must go through the below article for detailed information for UPSC NDA Exam. The online registration process for NDA I 2022 has been scheduled from 22nd December 2021 to 11th January 2022.

NDA Exam is conducted twice every year for selecting the eligible candidates for the admission to Army, Navy, and Air Force wings of NDA and Indian Naval Academy Courses (INAC) of the NDA for the 149th Course and for the 111th Indian Naval Academy Course (INAC) commencing in July 2023. National Defence. The selection of eligible males & females will be done through Online Examination and SSB interviews.

NDA I notification 2022 is released on www.upsc.gov.in on 22nd December 2021 announcing 400 vacancies for boys & girls to be recruited for FY 2022-23 for National Defence Academy and Naval Academy. The direct link for the official notification has been provided below, click on the link and download UPSC NDA 1 Notification 2022 PDF.

To have an overview of the UPSC NDA 1 Exam, the candidates must refer to the below summary table including all important details for the exam. Now eligible girls can also apply for National Defence Academy & Naval Academy Examination.

The UPSC NDA I Online Written Examination has been scheduled for 10th April 2022 (Sunday) as mentioned in UPSC Calendar 2022. Check the important dates for NDA-I & NDA-II 2022 from the below table and mark them on your calendar so you do not miss out on the exam dates.

As per NDA I 2022 Notification, a total of 400 vacancies will be recruited for National Defence Academy (NDA) and Naval Academy (NA) out of which 370 belong to NDA and the remaining 30 for NA. Check the below table for detailed vacancy distribution for NDA- I 2022.

The online application form for NDA I Exam 2022 has been activated from 22nd December 2021 to 11th January 2022 on www.upsc.gov.in. All the eligible boys & girls candidates interested in NDA-I 2022 can fill the NDA form 2022 through online registration by clicking on the link given below.

The Application fee for a General Category candidate is Rs 100/-

The fee can be deposited in any Branch of SBI by cash or can be submitted by using the net banking facility of the State Bank of India or directly by using Visa/ MasterCard/ Rupay Credit/ Debit Card.

Candidates belonging to SC/ ST candidates/ Sons of JCOs/ NCOs/ ORs are exempted from payment of the fee.

1.    Before filling out the UPSC NDA I application form, the candidates must keep the following documents aside.

2.    Scanned images of photograph and signature

Visit the official website of www.upsc.gov.in and click on "Apply Online". The candidates have to complete their application form in two stages: Part I & Part II which have been detailed below:

The part I registration to fill NDA form 2022 is classified into 4 steps:

Step-I The candidate must begin with the registration process and submit all the details correctly in the application form.

Step-II The next step is to choose the preferred branch you want to join in the Defence Army.

Step-III Enter your email id and phone number and verify the details.

Step-IV The last step to complete the registration process is the generation of the Registration ID.

Step-I Pay the application fee for UPSC NDA I Exam as applicable.

Step-II Select the preferred city where you want your exam centre to be allotted.

Step-III Upload your photograph, signature, and photo-identity proof. The file should not exceed 300 kb and must be less than 20 kb.

UPSC NDA is the examination process that is conducted by the Union Public Service Commission to provide the opportunity to the youth of the country who wish to join defence jobs. The selection for defence jobs through NDA 1 Exam 2022 will be conducted in two stages:

A candidate who qualifies in a written examination will be called for a personality test which will be conducted to check the intelligence and personality. The candidates have to clear both stages to get their names on the merit list. The merit list/final result will be generated by UPSC with the cumulative score of the Written Exam and the SSB will be considered for final selection.

The candidates who are preparing for NDA I Exam 2022, must be familiar with the exam pattern that is followed by UPSC. We have discussed the details for NDA 2022 exam pattern below:

1. The exam will be conducted in an offline mode

2. The questions will be in Multiple Choice Questions

3. The questions will be asked in bilingual languages (English & Hindi)

5. Have a look at the detailed exam pattern for NDA I Online Examination

There would be two subjects Mathematics & General Ability Test for which the candidates have to be well-prepared. The candidates are advised to not skip any topic for NDA Exam and begin their preparation along with the detailed syllabus. There will be questions from English (200 marks) and General Knowledge (400 marks) in the General Ability Test.

The questions in this paper will be asked from English language and General knowledge.

The SSB Interview will be conducted for assessing the Intelligence and Personality Test tentatively from January 2023 to April 2023. The candidates who have qualified in the written exam have to appear in 2 stages interview process conducted by the officials. The candidates who qualify for the interview round are required to submit a birth certificate and pass certificate. The merit list will be prepared on the basis of the candidate's performance in the online examination and interview round.

The candidates must hold the minimum qualification to be eligible for Defence Jobs. Below we have mentioned the details for Education Qualification, Age Limit, Nationality, Physical Standards.

For Army Wing of National Defence Academy: The candidate should be 12th pass/HSC or equivalent examination from a State Education Board or a University

For Air Force and Naval Wings of National Defence Academy and for the 10+2 Cadet Entry Scheme at the Indian Naval Academy: The candidate should have completed their 12th Class/HSC or equivalent with Physics and Mathematics from a State Education Board or a recognized University

NOTE: The candidates who are appearing in the 12th Class under the 10+2 pattern of School Education or equivalent examination are too eligible to appear in the UPSC NDA examination.

The candidates must be unmarried male/female and should be:

The candidates must be physically fit as per the physical standards for National Defence Academy and Naval Academy. They should be able to fulfill the following criteria:

It is expected that UPSC will release the NDA I Admit Card in the last week of March 2022 for the exam which has been scheduled for 10th April 2022. The candidates who are going to register for the exam can download their UPSC NDA I Admit Card from the official website @upsc.gov.in using their registration number and password generated at the time of the UPSC NDA I 2022 Application Process.

The result of the online test will be released around a month later after the conduction of the NDA-I 2022 Exam with the names of candidates shortlisted for the interview round. The commission will be releasing the merit list of candidates selected for the admission to Army, Navy and Air Force wings of NDA and Indian Naval Academy Courses (INAC) of the NDA for the 149th Course and for the 111th Indian Naval Academy Course (INAC) after the SSB Interview process.

The candidates were given choice to choose their preferred cities for the exam centres while filling out their application form. Below is the list of cities where the UPSC NDA I Exam will be conducted on 10th April 2022.

Our programs are the most exhaustive online learning Programmes in Banking, SSC, defence, and other competitive exam verticals across India. Students can customize the topics as per the requirement. Our package covers 100% of the syllabus. The quality of OLExpert’s content is really great and made it in a very interactive manner.